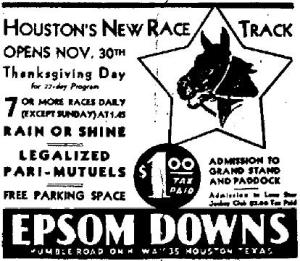 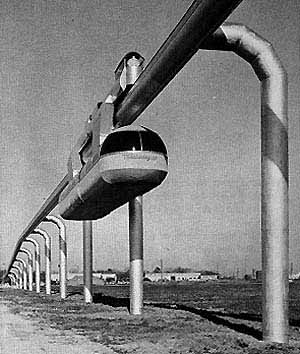 Pari-mutuel wagering was first legal in Texas from 1933 to 1937, during which time the two top horse racing tracks in the state were Arlington Downs, between Dallas and Fort Worth, and Epsom Downs in Houston. Arlington Downs was constructed and opened in 1929 by William T. Waggoner, at a cost of $3 million. Between 1929 and 1933, Waggoner used the park for prize races and civic events, and participated in the lobbying efforts that helped bring about the Texas state legislature’s legalization of pari-mutuel betting. Waggoner lived to see Arlington Downs’ early success, but died in 1934.

Epsom Downs was built at a location off Jensen Drive, then known as the Humble road, about six miles outside what were then the city limits. It was named after the famous Epsom Downs in England, site of the English Derby – the San Antonio paper did not think much of the name, opining that “Houstonians could have picked better.” The park was built by Montreal turfman Lou Smith, who had built the Rockingham Park track in Salem, New Hampshire. Epsom Downs was a replica of Rockingham Park (though papers often reported it as being a replica of the English park), and was built – in a hurry – for somewhere in the range of $400,000 to $600,000 (reports vary). The grandstand seated 4,000, and a terrace in front of it provided standing room for 25,000.

The inaugural race at Epsom Downs occurred on Thanksgiving Day, November 30, 1933, just after the end of a successful meet at Arlington Downs. The feature race was the six-furlong Thanksgiving Day Handicap. Governor Miriam A. “Ma” Ferguson attended with her husband, former governor Jim Ferguson, skipping the annual U.T./A&M football game. Approximately 30,000 other spectators were also in attendance to see Gift of Roses win the handicap.

Opponents of pari-mutuel wagering were successful in having the betting laws repealed in 1937, but the pari-mutuel wagering lobby did not abandon its cause. In the 1940’s, Houston oil man George H. Echols joined the fight. By 1947, a bill was introduced in the Texas legislature that would again make betting on horses legal in Texas.

An article published the next day suggested that Echols’ plans were unrelated to the bill pending in the Texas legislature, saying that Echols planned to build the race track regardless of the bill’s outcome. “Echols isn’t concerned over whether the bill passes or not; he’s going to conduct his racing strip for the sport that’s in it.” Echols was quoted as saying: “For a long time, it has been my ambition to build a race track for quarter horses. Those are the horses that had so much to do with building Texas. Quarter horses, sometimes called range horses or cowponies, are dear to the heart of all true Texans.”

The park would be called Arrowhead Park. It would encompass 121 acres, and the track would be a half mile oval with three-eighths of a mile straightaways. The grandstand would seat 3,450, the bleachers 1,500, and the clubhouse 300. Echols was installing a $68,000 light system so that events could be held at night.

A March 7, 1947 newspaper article reporting that the pari mutuel wagering bill was having a difficult time getting out of committee put a rest to any notion that Echols was building Arrowhead Park purely for the love of the sport. The article noted that Echols “already is building Arrowhead Park, a $1,250,000 racing plant on Old Spanish Trail six miles from downtown Houston.” If the Texas legislature did not pass the bill, said Echols, he would go forward with a plan to build a horse track just across the Louisiana border: “Then the Texas money can continue to flow out of Texas and the Baptist preachers can continue to stick their noses into politics, instead of staying in their pulpits.”

Arrowhead Park was built, but the pari-mutuel wagering bill did not pass. The park hosted quarter horse racing starting in June 1947. However, without betting, the venture was apparently not successful. By September, it was reported that Echols had leased the park to “miniature auto racing interests”. In 1954, ran for state representative, campaigning “on a platform of liquor by the shot and local option for horse racing,” but did not win.

In that same year, a monorail prototype created by a Houston company, Monorail, Inc., was exhibited at Arrowhead Park.

The Texas state legislature did not authorize pari-mutuel betting again until 1986.

This entry was posted in Amusement Parks, Lost Houston, Sports. Bookmark the permalink.