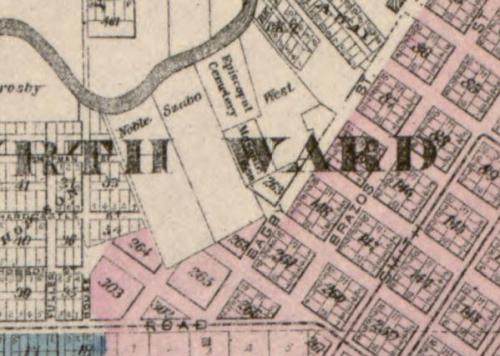 [Detail of Episcopal-Masonic Cemetery from 1895 Map, showing location near intersection of Bagby and Lamar]

Newspaper articles about neglected and abandoned Houston cemeteries are not that uncommon.  What may surprise some, though, is that a newspaper article on the subject appeared over a hundred years ago, when the city of Houston was relatively new. Because of the length of the article, only the first part of the article (which concerns the old Episcopal-Masonic Cemetery) is reprinted below.  The other two parts of the article, which concern two other early Houston cemeteries, will be featured here on later dates.

A number of the words in the discussion of the Episcopal-Masonic Cemetery are difficult to read in the copy of the article that Houstorian viewed.  Bracketed words below are best guesses – bracketed question marks indicate a word is missing, and no guess was made.

The article is titled “Houston’s Oldest Cemeteries: Cities of the Dead of Past Generations Neglected and Some of Them Almost Obliterated,” and it appeared in the Houston Daily Post on February 15, 1903:

Within a dozen squares of the business [district] of Houston, almost hidden from [view] with a matted growth of rank vegetation, that at this season is sere and dead, [sits] the city’s oldest cemetery.

[It is] unkempt and forlorn and presents [an] appearance that is too often characteristic of old age.  In the hallowed spot [sleep] many of those who helped to hew [?] of Houston’s greatness.  Their [bodies] have long since changed to ashes [and] time has corroded the slabs that [marked] their resting places until the [?] letters on the perishable marble [are] no longer legible.

The younger generations and later residents of Houston, perhaps, do not even [know] of the presence of this sacred old [burial] ground.  But the old-timer who has [helped] to fashion the destinies of the city [in] the last half century is aware of its [presence] and not unlikely has dropped [?] within its inclosure.

Adjoining the Sam Houston city park on [the] north side is a narrow strip of ground [embracing] some six or seven acres.  It approaches within 100 feet of Bagby street, [?] a view of it is obstructed by houses [that] have long been built between it and the thoroughfare.  A high board fence [separates] it from the city park, like the [?] partition between the realms of life and death.

Many gay people as they have strolled through the park have paused and wondered what lay beyond the high fence.  At [one] point a stone structure, bereft of roof, [?] its scarred walls, like the ruins of [some] miniature monastery, above the [?].  A half century ago it was a vault [?] within it were coffined forms.  Now it is a mere shell.  A later generation has [removed] the bodies and placed them in [?] graves.

The burial ground is known as the old Episcopal cemetery.  No records are obtainable as to when it was laid out, but [?] common consent it is accredited the [?] of the most venerable cemetery in the city.

Years ago the city sought to condemn it, and similar steps have been taken at various times since.  The right of the city to do so was always questioned and with sufficient force to prevent the action being carried out.  Some two years ago the city [?] attempted to purchase the grounds.  If the deal had been consummated it was the [?] to remove the bodies and add the [?] to the city park.

Burials have practically ceased there and [?] one is recorded during the past two years.  In fact, from time to time bodies have been removed and placed in more modern cemeteries, until now the little [city] of the dead has not half its former inhabitants.  A number of family lots in which reposed all that was mortal of whole [?] of two generations ago have been [?] depopulated.

[?] slabs still lie scattered about and their simple graven announcements give [thoughts] to conjure by.  With but few exceptions the graves are entirely overgrown and the mattes mass of vegetation is so dense that parts of the grounds can not be penetrated at all.  In many lots [?] which are fragments of iron fences [?] have grown from the seed and the [?] reproduction of weeds and briers have flourished and withered, obliterating [?] traces of graves.

A few rambling notes gathered from old [?] and vault slabs may be of interest and may recall faces that smiled generations ago and hands that performed their [?] in the ceaseless struggle of human
[?].

[One] vault bears the following inscription:

On what is perhaps the largest shaft in the grounds is the following: “Sacred to the memory of Captain D.C. Farmer. Called from labor to reward August 4, 1870.”

“Mason, Holland lodge No. 1, A.F. and A.M.
Who wears the square upon his breast does in the
Sight of God attest and in the face of man
That all his actions will compare with the
Divine, the unerring square, that square
Great nature’s plan.

Over the River company Fifth Texas regiment, Hood’s brigade.
On Fame’s eternal camping ground
Their silent tents are spread,
And glory guards with solemn round
The bivouac of the dead.”

Near the entrance of the cemetery is a shattered shaft bearing the following:

“Henry Benchley, died February 24, 1867, age 46 years.  Erected by the Houston and Texas Central Railway company as a tribute of respect to an upright man and a faithful officer.”

“Enter rest eternal, the kindest husband and most indulgent father, the truest friend and the most generous man.”

The reference to the graves of Abraham Payne (died January 11, 1840), Catherine Cartright Payne (died 1841, at the age of 22), and Mrs. Hannah Payne, “native of England” (died November 10, 1870) is interesting.  These appear to be the father, older sister, and step-mother of Kezia Payne DePelchin, the founder of the DePelchin Faith Home (which now operates as the DePelchin Children’s Center).  DePelchin herself died in 1893, and some sites mention that she and her “parents” were relocated to Forest Park Cemetery on Lawndale.

The Masonic references in the article suggest that the author was exploring not just the grounds of the old Episcopal Cemetery, but also those of the adjacent Masonic Cemetery.  The two are often referred to as the “Episcopal-Masonic Cemetery”, and it’s quite possible that the boundary between the two wasn’t clearly marked, especially in later years.

William P. Massie, whose year of death is not legible, appears to have been a Mason.  He may be the William Massie who fought at the Battle of San Jancinto in 1836.  (The gravestone of a William P. “Massey” is mentioned in a 1960 Houston Chronicle article as one of a handful of gravestones still visible in the Masonic Cemetery next to the Episcopal Cemetery.)

The poem excerpted above was written in honor of Captain D.C. Farmer (died 1870), a captain in Hood’s Brigade in the Confederate States Army.

S.H. Skiff (died 1859) appears to have been a charter member of the Houston Hook and Ladder Company No. 1 (a predecessor of the fire department), which was formed in 1858.  Dick Dowling was another of the handful of charter members.

Finally, Henry Benchley (died 1867) was the namesake of the town of Benchley, Texas.  Early in his life, he served as a state senator and lieutenant governor in Massachusetts and, in the 1850’s, he helped found the Republican party.  He is said to have moved to Texas to operate a station on the Underground Railroad, helping escaped slaves, and to have been arrested and jailed in Texas for having done so.  His grandson, Robert Benchley, was a famous humorist and contributor to the New Yorker.

As noted in the Louis F. Aulbach article on the Episcopal-Masonic Cemetery, some remains were moved from the cemetery in the 1870’s, to Glenwood Cemetery.  Additional remains were moved to Brookside Cemetery in 1938, when City Hall was constructed.  Then, in 1959, 80 additional bodies were moved to Glenwood Cemetery.  However, in light of the information the Daily Post article gives about the neglected state of the Episcopal-Masonic Cemetery as early as 1903, it is unlikely that all remains in the cemetery were located, much less relocated.

This entry was posted in Cemeteries, Downtown, People. Bookmark the permalink.